The list contains all barrels that are available.
Barrel 32 is not available anymore but 31 is exactly the same only different spring inside.
We do not have them all readyly available, but we suggest you ask us at:

info@antiquedutchclockparts.nl
for price and availability. 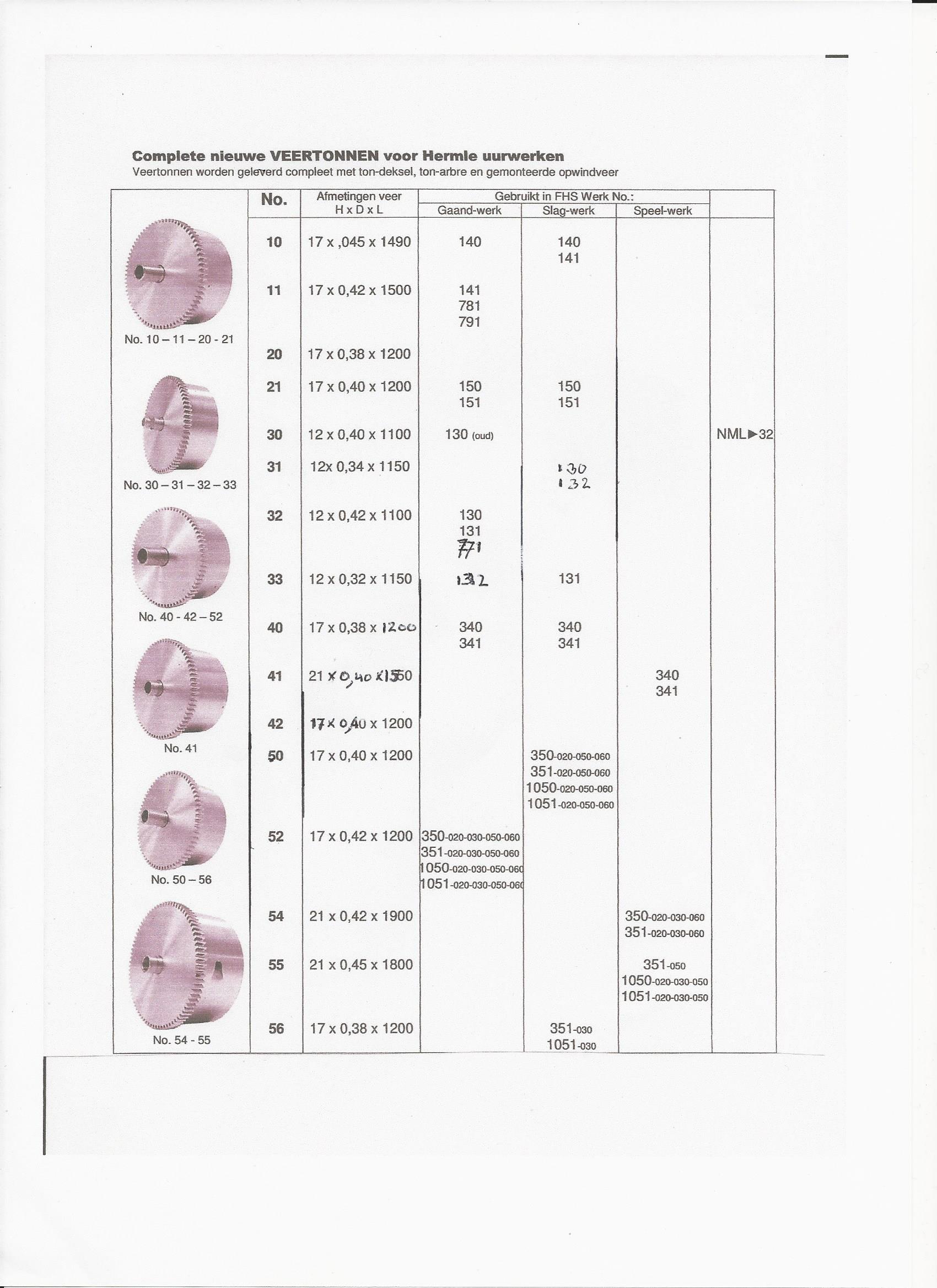 It is impossible to list all varieties of available parts, our inventory is much larger then what you see in our store or on Ebay.
It is impossible to list all of them. But when asked we will certainly try to find what you need. That goes without saying for all
the parts you can imagine for clocks! We have specialized in Dutch clocks. We do carry parts for the antique versions but we specialize in the
contemporary Dutch clocks.

We found that there is a big demand for parts of clocks build by Warmink clock factory of Almelo in the Netherlands. Warmink stopped
producing clocks and ended his business in 2008. Warmink was very popular in Netherlands as well as abroad. Every household in the
Netherlands had the very common Zaandam or Zaanse clock on the wall, personally that was my first contact with the Warmink clocks as
a Zaandam clock was given to me and my wife as a wedding present. It is my guess that is the reason it was so popular in the Netherlands.
There is a story going round that Warminks production was too slow to keep up with the demand and that the clocks that where ready ended
up straight in the waiting trucks. The factory of Warmink was located in the city center of Almelo. Warmink sold the factory grounds in 2002
and the factory was relocated. In the mid 1970s Warmink had 270 people employed, and was to be found on all major fairs Europe wide in
Utrecht, Hannover, Bazel, Antwerpen, Dusseldorf, Munchen, Birmingham, Barcelona. Warmink produced also clocks under the name
WUBA. (Warmink uhrenbetrieb Almelo). Warmink strived to make his clocks as much as possible by hand and spent a great deal of time on the
polishing of the cases so that the walnut and oak got a special shining patina. The biggest seller remained during all the years the Zaanse
or Zaandam clock. Warmink sr. started the factory in 1929 in 1968 his son took over and managed the company until he was the last man standing.
It is not known why the factory stopped its production all together, maybe the concept of time in mechanical clocks had had its best years.
After they stopped the knowledge and parts base for the clocks was gone.


Of course Warmink used clockworks for all his clocks from the major German clockwork builder Hermle, but also SBS feintechnik can be found
and UW or Urgos Werke. The last factory is also out of business and that is a pity as it is hard to find replacement platform escapements for that type of clockworks.

In the early years they made the one day versions and for that Warmink used clockworks from major Swartzwald cuckoo clockwork builders.
Badisch and Hubert Herr also factories that are out of business.


We have specialized in understanding what clockworks are used, the pendulum lengths and the pendulum sort. It is not one size fits all!
We gladly help you to find out what you need for your clock. Our years of working in the filed gave us a large knowledge base. Just try us!
Warmink's story ended in 2008 and left a vacuum in replacement parts for all the clock they build and it was not only the Zaandam or Zaanse
clocks, also Friesian tails clocks, Sallandse clocks schippertje clocks and Friesian stoel clocks. The Warmink grandfather clock are
one of a kind, and we exported them all over the world and became very well treasured a heirloom to pass on. All Warmink's clocks are beautiful
detailed and made with care and attention for the detail. The table clocks are one of a kind. With a Warmink clock you have the best of Holland on the wall or on the mantel!

I end the story with a quote from one of Warmink's brochures;

"Time passes without hesitation, it does by the ticking of a clock. The concept of time was for centuries humans interest because a modern
cultural society is unthinkable without the realization of time.
All mankind's experiences en all that is entwined with the world and the universe are built on the elusive concept we call time. The clock, the substitute of the sun and stars, tells us it is "time to get up", to go to work, eat or sleep. "Time" is not only controlling
what we do or not do, but our entire being! The urge to measure time inspired people and since the 14th century clocks where build.
From early on they decorated these measures of time with mythological figures and symbols of time."


I absolutely agree with the statement Warmink made over time and clocks and the fascination of mankind with time.